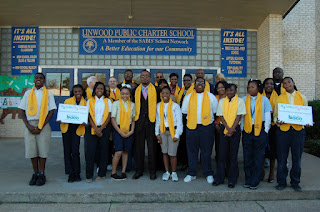 From Shreveport Times:  Linwood Public Charter School has announced it will open its doors to at least 60 more students this year, raising its fall enrollment target from the current 460 students to 520, officials said Thursday.

Linwood Board President Gard Wayt touted improved LEAP test scores as the impetus for the increase, noting percentages of test improvement convinced the board the education model provided by SABIS, the international education school system that runs Linwood, works.

"We are very proud of our students for their hard work and efforts," Principal Vickie Carroll said.

"They are increasingly taking their work seriously. We are transforming the school's culture, as well as its academic standing."

New students represent about a third of the top class, allowing a valid comparison he said.

He said the increases are despite new sixth-grade students each year coming in with lower test scores than the previous year's sixth-graders.

"Each year, the gap we're dealing with has become bigger," he said.

What that shows, he said, "is there is a value-added component to staying with the SABIS system. We know now that continued engagement in the SABIS system of education produces significant differences in the results."

"The SABIS system will not let a child stay behind," he said. "We know every day and every week where every students stands in every subject."


Also, he said, "we are not obliged to keep any teacher who does not get results. That's a big difference. We can thin the herd. "Students also have become more proactive, he said, with the Student Life Department and eighth-graders holding a series of fundraisers this year that allowed a trip to Disney World.

"We're proud of the way they conducted themselves," Wayt said.  "There's talk next year of going to New York, to take in some of the plays on Broadway."

Also in the works: expansion of the student clinic at the school, reflecting a partnership with Christus Schumpert Health and a $100,000 federal grant.

The school plans to pursue renewal of its five-year charter and maintains a long-term goal of adding a ninth grade, he said. But now there are other challenges.

The challenge the first year, he said, was discipline. Putting surveillance cameras in hallways helped curtail most problems, he said.

The second year, the problem was attendance. That was solved by developing a bus system for the school that was not dependent on public school buses.

"Right now, the challenge is we are looking for good teachers," he said.  Incentives include a more robust 401(k) plan for teachers, base pay of between $40,000 and $45,000 a year and recruitment incentives that include moving expenses to help teachers come from out of state.

For the 2012-13 fiscal year, the school's expected enrollment of 520 students, has resulted in an anticipated budget of $4.64 million, based on $8,929 per student per the Minimum Foundation Plan, Wayt said.  "The money follows the child," he said

Efforts to convince students and parents they will benefit from attending the school over a Caddo Parish public school are under way and will continue through the start of the fall session Aug. 13, he said. "We're advertising," he said. "We are putting on community meetings, doing robo-calling and direct mailing. We're doing everything to let people know what results we have and what we offer."
0 comments

SABIS is featured on the Discovery Channel

The Discovery Channel features the SABIS educational program and its ability to meet the challenge of delivering a high quality education that is addressing the country's need for great schools. The SABIS model, 125 years in the making, is replicable and continues to change the world through education by providing a unique balance of rigorous academics, self-development, and life preparation to over 60,000 students in 15 countries on 4 continents (including in 7 US states).
0 comments 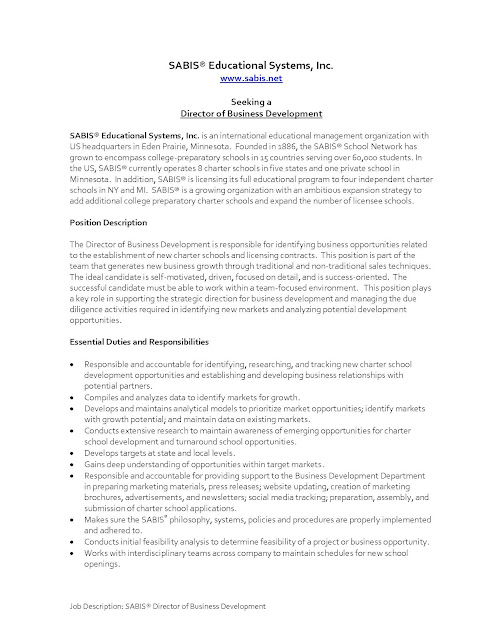 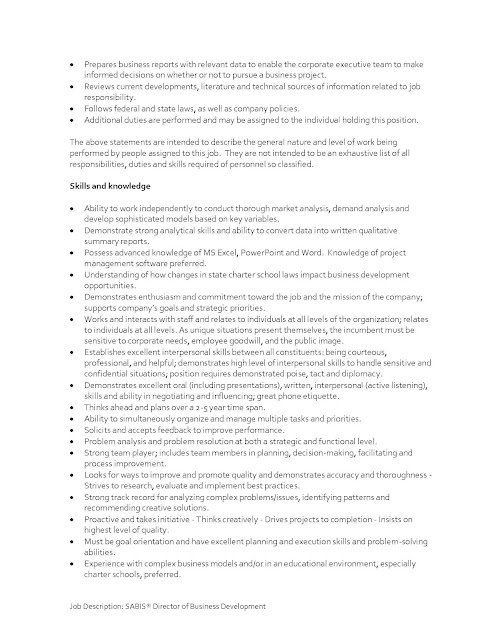 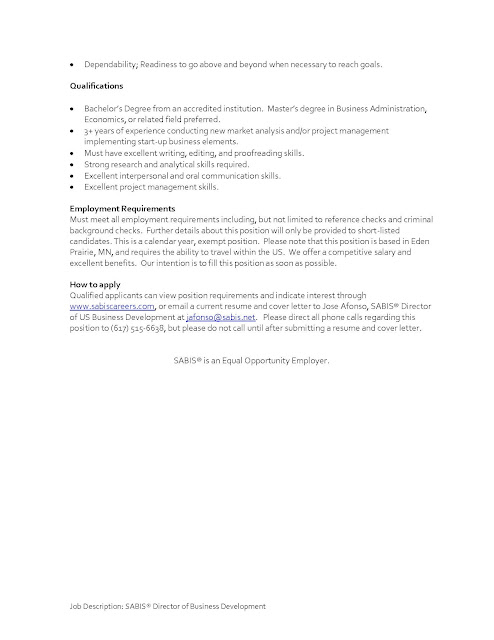 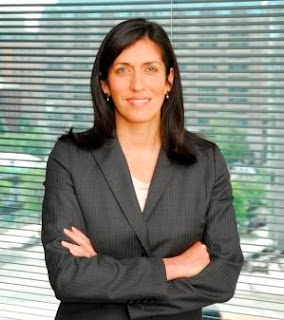 Today, the National Alliance for Public Charter Schools (NAPCS) announced it selected Nina Rees as its new president and CEO.  Ms. Rees is a former senior vice president for global education provider Knowledge Universe, former head of the Office of Innovation and Improvement at the U.S. Department of Education, where she oversaw the D.C. vouchers program, and a former senior education analyst at the Heritage Foundation.

According to the NAPCS press release, Ms. Rees will be "formally introduced in her new position at the 12th annual National Charter Schools Conference, which begins on June 19 in Minnesota in front of nearly 4,000 attendees.  Rees’s appointment also coincides with the 20th anniversary of the nation’s public charter school movement."  She is the third individual to hold this position since the organization’s inception in 2005, preceded by founding CEO Nelson Smith, who held the position from 2005 to 2010, and Peter Groff, who served from 2010 to 2011.

“The spirit of the charter school movement is embedded in the hearts of those who are running charter schools, and we need to leverage this more effectively and operate with a greater sense of urgency.” Rees added. “My focus will be to help replicate effective models, attract new education entrepreneurs and further garner bipartisan support. After two decades, it's clear that charter schools can help preserve the American ideal of a quality public education. The challenge for the next two decades is to build on past accomplishments to ensure that every child can realize the benefits of high-quality public schools.”

To read more about Nina Rees and her background as a passionate advocate for educational choice and quality schools, click here.  Nina is a fantastic selection to lead the nation's leading organization advocating for better schools.
0 comments

Shreveport, LA – In its third year of operation, the Linwood Public Charter School (LPCS) continues to
make solid academic gains. Its 8th Graders made double-digits gains in all subjects - English Language
Arts, Math, Social Studies, and Science - on the Spring 2012 LEAP over their performance in 2011. The
147 Linwood 8th graders outperformed their peers in other middle schools and in the other RSD school in
Shreveport and also outperformed the mean scores of their peers in RSD Louisiana schools. 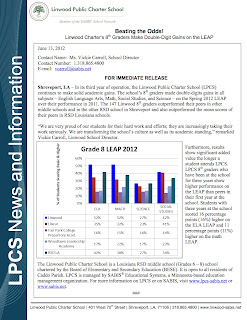 “We are very proud of our students for their hard work and efforts; they are increasingly taking their work seriously.  We are transforming the school’s culture as well as its academic standing” remarked Vickie Carroll, Linwood school director.

The Linwood Public Charter School is a Louisiana RSD middle school (Grades 6 – 8) school chartered by the State Board of Elementary and Secondary Education (BESE).  It is open to all residents of Caddo Parish (Shreveport). LPCS is managed by SABIS® Educational Systems, a Minnesota-based education management organization.  For more information on LPCS or on SABIS, visit www.lpcs-sabis.net or www.sabis.net.
2 comments

SPRINGFIELD, Mass. (WWLP) - All across the community, people paid their respects to Kevin Ambrose in many different ways.

At the Sabis International Charter School, students and teachers created a sea of blue to show their support of Springfield's fallen officer. Instead of following their usual uniform policy, students and teachers paid one dollar each to wear blue clothing. The money they raise will go toward a memorial fund.

“When we wear blue today, we represent and we respect the fact that he was an officer in our community and it's out way of showing love and appreciation to the city of Springfield,” said eleventh grader Ronald Kenniston.

“We just basically want to do our part and try to bring the community together on such an awful situation,” said student life administrator Jeff Londraville.

“We're there for him and we want to represent all the good things that he did as an officer of Springfield,” said ninth grader Cristian Rivera. 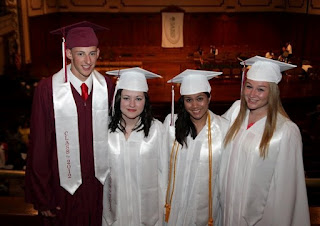 By Stephanie Barry, The Republican

Such was the case at the 12th graduation ceremony on Saturday for SABIS International Charter School at Symphony Hall. The milestone filled most of the seats at the venue, as the school yielded 114 new graduates. School Director Karen Reuter noted that the majority of this class had joined the SABIS rolls early.

“You should know 51 of the 114 began their school careers as members of our kindergarten class, and this class has achieved legendary MCAS scores,” Reuter told a crowd who greeted the soon-to-be-graduates with hoots of support and optimism to the tradition tune of “Pomp and Circumstance.”

Since its founding in 1995, the college preparatory charter school on Joan Street has become one of the most sought-after high school alma maters in the city, with a waiting list thousands of students long.

SABIS does not choose valedictorians or salutatorians; its line-up of speakers included onetime SABIS volleyball star Chelsea Orefice, who noted the hall included 114 reasons to be optimistic, clad in white and crimson robes and mortarboards.

Reuter said that the hall was filled not only with proposed graduates but those who nudged and nurtured them along the way.

“A high school diploma is nothing to take for granted,” she said.

On a soaker of a day that drove the weekend’s spate of graduation ceremonies and parties indoors, Mayor Domenic J. Sarno reminded the crowd that the city had endured its share of weather disasters this year, and commended the class for its part in establishing a tradition in Springfield in the school’s relatively short tenure. Sarno said the school is an example of not letting “a zip code dictate your future.” “Don’t let anyone, and I mean anyone, tell you that you can’t achieve your goals. Use that as adrenaline to prove them wrong,” he said.
0 comments