Gloria Urbina’s daughter, Anya Torres, is in seventh grade at Holyoke Community Charter School, and Urbina wants her to stay through high school. Urbina likes the school’s uniforms, the feeling of community, the leadership training, and the attitude of teachers.

“They tell kids every day you’re expected to do your best, to dream big,” Urbina said. “It’s a positive environment. They work hard.”

Today, the school only goes until eighth grade. School Director Sonia Correa-Pope said the school wants to expand, but is stymied by the state charter school cap, which limits the school to 702 students. It would need to add another 200 to 250 students to open a high school, Correa-Pope said.

Correa-Pope is part of a coalition of charter school advocates who are asking the legislature to lift the cap for underperforming school districts, like Holyoke. She points out that students at Holyoke Community Charter School, including subgroups of Latino students, low-income students, and English language learners, outperformed Holyoke public school students on statewide standardized tests in 2013.

“We want children to graduate from our school, and from there we want to track students at a college level and make sure they’re graduating college,” Correa-Pope said.

Charter schools are allowed to have more flexibility with curriculum, length of the school day, teacher pay and hiring than typical public schools. They are tuition-free and draw from the general population of a school district, with admission generally by a lottery system. The money the state would pay to the public school to educate that student is paid to the charter school, although the school district is still reimbursed for part of the cost of that student.

The charter school movement got a boost in 2010 when the legislature increased the number of charter schools in lower-performing districts. Overall, for the 2013-2014 school year, there were 35,300 students enrolled in 81 charter schools, with 53,500 on the waiting list, according to the state Department of Education.

In Western Massachusetts, Holyoke and Greenfield are classified as low-performing districts that cannot have any more charters under the cap, according to the Massachusetts Charter Public Schools Association. Holyoke currently has two charter schools - Holyoke Community Charter and Paulo Freire Social Justice Charter School. Greenfield has Four Rivers Charter Public.

The bill would also affect regular district schools. Massachusetts schools are ranked from level one, the highest-performing, to level five, the lowest-performing. The bill would give additional flexibility to some level three schools to take actions such as lengthening the school day, dismissing poorly performing teachers or administrators and hiring without regard to seniority.

Proponents of the bill argue that if there is a desire for more charter schools, and the schools have good results, there is no reason not to expand them. “We shouldn’t be putting a cap on success,” said Paul Grogan, president of the Boston Foundation and a leader in the pro-charter school coalition. “How can we possibly justify putting arbitrary limits on educational strategies that are working well?”

The cap has a particularly big impact in Boston, where student demand far exceeds space in charter schools. Holmes, the bill’s sponsor, said charter schools can help improve existing racial inequities by providing students with more choices. Holmes said in the area where he lives, in Mattapan, the neighborhood is 92 percent black or Latino, and there is a single level two school and no level one schools. “That begins to tell you why this legislation is so important,” he said.

Critics of the bill, including teachers’ unions, argue that charter schools take money from the state’s public schools.

Paul Toner, president of the Massachusetts Teachers Association, said lifting the cap “would drain more resources away from regular public schools.” Toner said many of the most motivated teachers and parents leave regular schools for charter schools. In addition, district money is taken from the public schools, but those schools still have to operate the same number of classrooms.

“If the charter schools are doing something that’s a help for students, that’s working and replicable, we should be doing it in our regular district schools rather than exporting education to charter schools,” Toner said.

Superintendent of Springfield Schools Daniel Warwick said while charter schools offer parents greater educational choices, the cost is high for public schools. “Lifting the cap would create a huge problem and exacerbate the difficult budget issues we already face,” Warwick said. He said Springfield spends nearly $40 million annually to fund charter and school choice programs. “Those are resources that we’d rather spend within our schools on the children whose parents have entrusted us with their education and care,” Warwick said. “Unfortunately, the reverse is true and we’re forced to make cuts in our schools to account for the millions of dollars we have to pay out for charter schools and School Choice.”

Not all charter schools have had exemplary results. Since 1994, according to the Department of Education, four charter schools had their charters revoked; eight voluntarily surrendered their charters after opening; and two have not renewed their charters, which last for five years. In 2010, the state revoked the charter of the Robert M. Hughes Academy in Springfield after a cheating scandal on Massachusetts Comprehensive Assessment System tests. Springfield’s New Leadership Charter School closed in 2013 after failing to improve its academic, financial and management performance and being told that a charter renewal was unlikely.

The legislation is currently pending in the Joint Committee on Education. The committee has until March 19 to refer the legislation to the full House and Senate. If the committee does not act by then, the bill is unlikely to pass this session.

Sen. Sonia Chang-Diaz, a Boston Democrat and committee co-chair, could not say Wednesday whether the bill would be released from the committee. “We are working hard to get to yes on giving more room for charter operators that are doing really well to expand,” Chang-Diaz said. “We want to do so without taking tools out of the toolbox of district schools that are showing great promise.”

Committee co-chair Rep. Alice Peisch, a Wellesley Democrat, said she is hopeful the bill will be reported out. “We just have a few relatively small details to work out,” she said Wednesday.

Peisch said she is generally supportive of the bill. “I think the bill strikes a good balance,” she said. “It provides some more flexibility for district schools while at the same time hopefully allowing some of the charter schools that have had some real success to be able to serve more students.”(Click here to read complete article at MassLive.)
0 comments

AMHERST— Seconds away from winning his third Western Massachusetts boys basketball championship, Sabis senior guard Nelson Zayas checked out of the game and received a standing ovation from the Bulldogs cheering section at the Curry Hicks Cage.

After scoring a game-high 24 points to lead top-seeded Sabis past No. 3 Hoosac Valley, 71-56, Saturday afternoon, Zayas walked over to the water cooler for a drink and joined with coach John Williams in an embrace.

"I just told him I love him,” Williams said. “I love all my kids. We always stress that we are family."

Zayas joined the Sabis basketball team as an eighth-grader and in five season played in seven playoff games at the Curry Hicks Cage. During his eighth-grade season, Sabis defeated Hoosac Valley in the Division II championship en route to a state championship.

“It was crazy,” Zayas said. “I didn’t get much playing time, as an eighth-grader. It’s a little weird, you know, starting with them and now ending in my last year playing against them. They’re a good team. “

In his freshman season, Zayas again returned to Cage and won the Western Mass. Division II championship, this time not as a bench-warmer behind Sabis 1,000-point scorers Andre King and Kamali Bey, but as catch-and-shoot role player.

“I was a freshman , it was the first year I actually got some playing time. I was nervous as can be,” Zayas said. “Like always, my teammates helped me out, encouraged me, and fed me the ball. They’re the reason why I play so confident.  (Click here to read complete article.)
0 comments

AMHERST — The division, the seed and the expectations were different for the Hoosac Valley Regional girls basketball team in its second consecutive trip to the Curry Hicks Cage, but the result was exactly the same.

The No. 2 Hurricanes’ active full-court defense challenged and frustrated No. 1 Sabis in the Division III Western Mass. girls basketball final Saturday afternoon, as Hoosac Valley ran away with a 72-41 victory to repeat as Western Mass. champs. Last season, as a No. 7 seed, the Hurricanes, of Cheshire, defeated Berkshire County rival Drury in the Division II final at The Cage.

The defensive pressure that has been Hoosac Valley’s calling card all season led to 26 Sabis turnovers Saturday afternoon, as the young Bulldogs struggled at times to play at the pace Hoosac Valley set in the first half. Those takeaways led to a number easy points: Hoosac Valley had a 34-24 advantage on points in the paint, and shot 20-for-32 from the free throw line.

“We put in a lot of time into that in practice. We focus on defense mainly, and then that’s how we generate our offense,” said senior Meg Rodowicz.  (Click here to read complete article)

AMHERST — Alon Chappell had just one basket on Wednesday night, and was it huge. 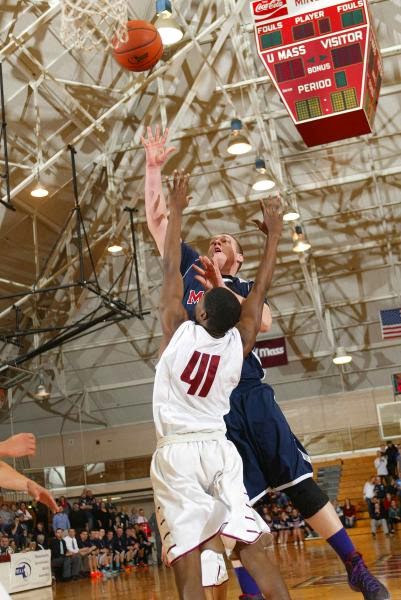 The game-winner came just nine seconds after Mahar big man Jake Paul had drained a pair of clutch free throws to put the Senators back in front. Mahar led nearly the entire game, but the Senators struggled to score in the third quarter and early in the fourth, allowing Sabis to get back into the game. After Mahar led the entire way since early in the first quarter, the Bulldogs came back to claim their first lead since that time when Nelson Zayas (game-high 20 points) stole the ball from Mahar guard Malik Adams and scored on a breakaway layup with 3 minutes, 32 seconds left in the fourth quarter for a 36-35 lead. Mahar scored the next five points to take a 40-36 lead, but Sabis hung around. Mahar’s Nick Slattery had a chance to make things difficult for Sabis with 52.3 seconds left when he went to the free-throw line but missed both shots to keep Sabis down by two at 40-38. Zayas made Mahar pay as Sabis worked the ball up to the guard and Zayas hit an off-balanced, 12-footer as he was fouled to tie the score. The ensuing free throw was good and Sabis had a 41-40 lead with 42.7 seconds left, setting up the dramatic ending. 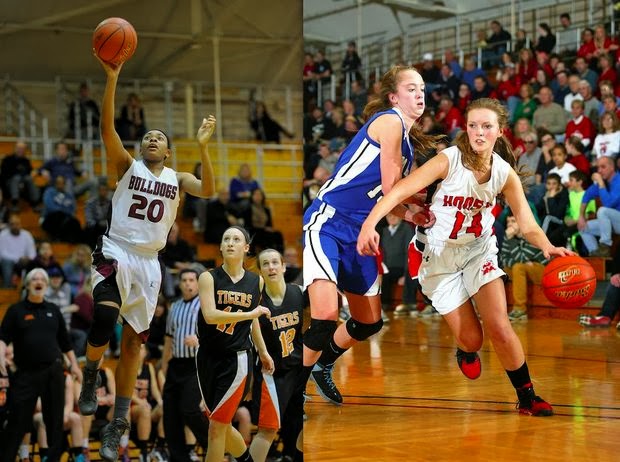 AMHERST – It’s been 13 months since the Hoosac Valley High School girls basketball team has lost to a Western Massachusetts opponent.

The second-seeded Hurricanes (21-1) enter Saturday’s Western Massachusetts Division III final against No. 1 Sabis (19-5) having won 27 straight against teams from the region, including 19-0 this year.

The teams square off at 2:15 p.m. at Curry Hicks Cage in a championship doubleheader for the schools. The boys teams play in the Division III final immediately following.

Hoosac won the Division II title last year before moving down in realignment. The Hurricanes enjoyed an absolutely dominant season, with all victories by double digits. That has carried into the postseason with a 32-point win over Mount Greylock in the quarterfinals and a 31-point win over Granby Tuesday.  (Click here to read entire article)
0 comments