Dr. Degatano’s experience ranges from classroom teacher to administrator, roles in which he readily accepted and met the challenges of educating a diverse population. His first administrative position in Elizabeth included the supervision of all math and language arts teachers servicing 18 schools. Following this, he became the Director of the Union County Educational Services Commission, where he operated various programs for 21 school districts.

Dr. Degatano’s next challenge was a move to the private sector, where he was the principal of an alternative high school and the Executive Director of Independent Child Study Teams and Educational In-Roads. The next opportunity was that of Vice President for Sylvan Learning and Catapult Learning. In this last role, he was responsible for a $44,000,000 budget of educational programs and supervised 1,200 employees in 200 schools throughout NJ. Over the last eight years, Degatano has served as an adjunct professor for the School of Education at Drexel University.

“We are so pleased that Dr. Degatano has joined our leadership team at the International Academy of Trenton,” said George Saad, Vice President of Operations for SABIS®. “His varied experiences within education and beyond will help our students remain focused on success and the achievement of the rigorous college-prep mission of the SABIS® program." He continued, “Dr. Degatano will be leading the newest member of the SABIS® School Network, which traces its educational program origins to 1886. He shares our belief in high expectations, no excuses, and the belief all students, including those from economically disadvantaged backgrounds, can be prepared for success in college.”

While the school’s permanent facility is built, the International Academy will be located at 720 Bellevue Street in Trenton (at the former Blessed Sacrament School).

Enrollment for the International Academy is underway; interested parents can apply online at iat.sabis.net or call 609-759-2005.
0 comments 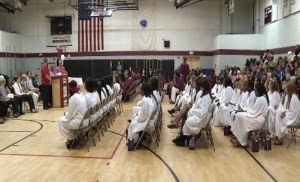 The Sabis International Charter School senior was looking forward to graduation and college. Now, as her classmates prepare for the next chapter in their lives, they’ll be taking a little piece of Allison with them.

When Allison was killed in the crash near Springfield’s Blunt Park, her family received tremendous support from the community — so much, they were able to establish a scholarship fund in Allison’s honor.

Today, all 105 of her classmates became the recipients of that generosity.

“We wanted to have something for the kids to take to college with them — to take a piece of Allison,” says Donna.

At a scholarship ceremony Friday morning, every member of Allison’s senior class took home a few of her favorite things. Seven students also received tablets, and another 13 received something that was at the top of Allison’s college wish list.

“Allison also wanted us to buy her a MacBook Pro computer to take to college, so I just thought, or we thought, it was fitting that some of the recipients got the MacBook Pros, this way Allison will go off to college with a lot of her friends,” says Donna. “She’ll be in their hearts.”

The gifts are a small piece of positivity from the girl who could find good in even the worst of circumstances.

“I don’t think there was a person in here that didn’t like her,” says Donnie. “No matter how bad your days was, just talking to her, she would put you on the up-rise, just like that.”

Holyoke, MA (May 29): Massachusetts State Senator Don Humason visited the Holyoke Community Charter School, a member of the SABIS Schools Network, which opened in fall 2005 and currently serves 702 students in grades K-8.  Senator Humason toured the school facility and then met with students, staff and parents in the indoor "garden room" where he heard a plea for the senator to support upcoming legislation that would raise the cap on the number of students who can attend charter schools.

Holyoke Community's parents and students are seeking to create a high school, but the current cap leaves less than 100 remaining seats available for Holyoke's resident students to attend charter schools.  Currently, the vast majority of the school's graduating 8th graders attend the local Holyoke High School, where they are often placed in advanced classes.  During the visit, Senator Humason heard from 8th graders who expressed love for their school and preference to remain there through high school.  He also heard parents speak about the school's college-prep mission and caring and welcoming environment.  The school's director, Dr. Sonia Pope, handed Senator Humason a binder containing hundreds or support letters and petition signatures from parents and supporters of raising the state's charter school enrollment cap. 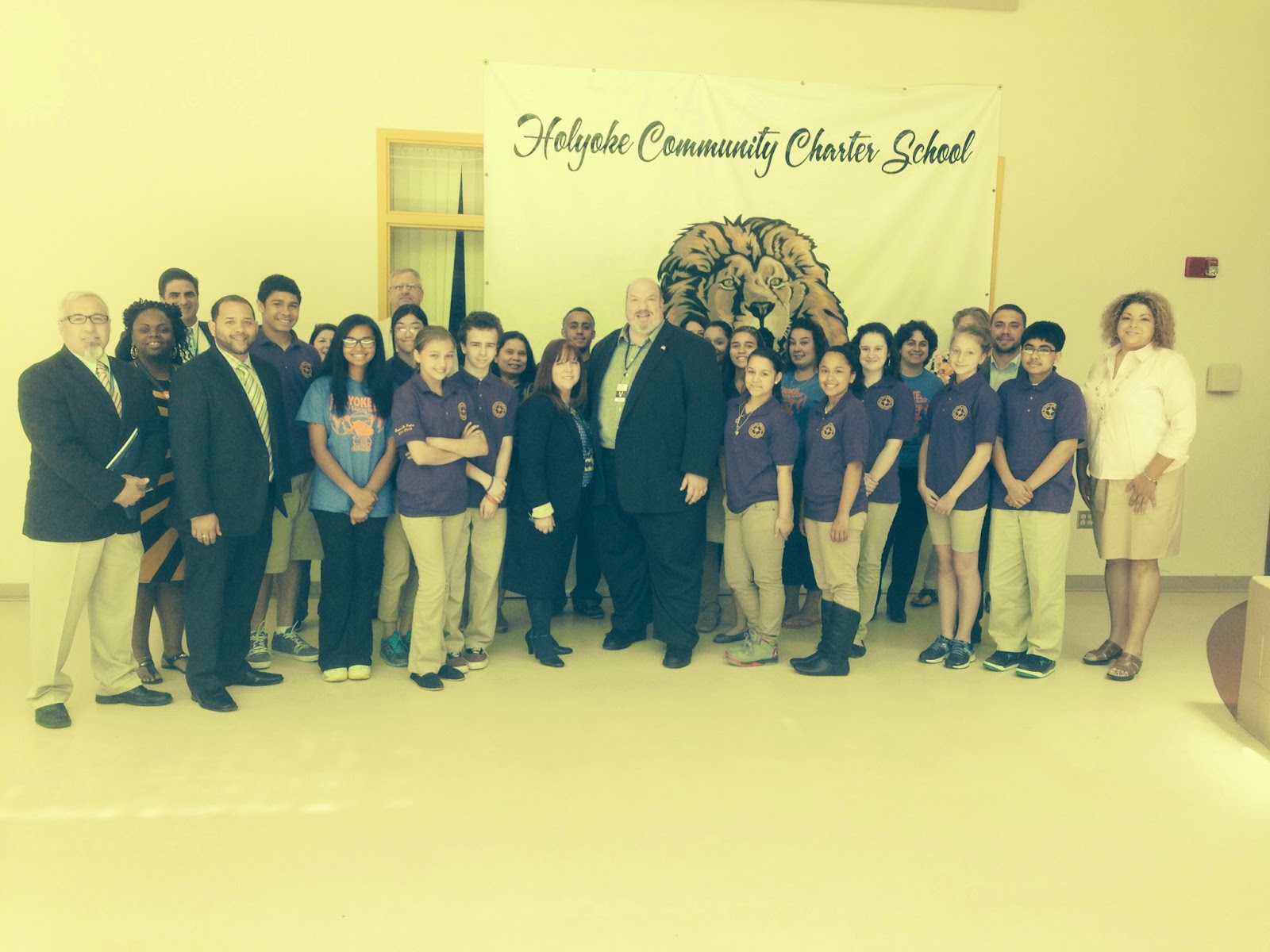 Senator Humason represents Agawam, Southwick, Granville, Tolland, Russell, Montgomery, Southampton, Easthampton, Chicopee (7, 8A, 9A), Westfield, and Holyoke in the 2nd Hampden and Hampshire District of the Massachusetts State Senate.   Prior becoming a senator, he served in the Massachusetts House of Representatives from the 4th Hampden District from 2003 to 2013.

The International School of Minnesota (ISM), a member of the global SABIS® School Network, recently ranked 2nd in Minnesota on The Washington Post’s list of “America’s Most Challenging Schools.” 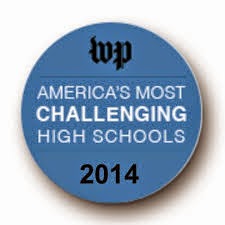 The Challenge Index identifies the schools that are working the hardest at challenging average students with advanced courses and have placed an obvious focus on academic success for all students. All qualifying schools are included on the list, which has grown considerably in the last year. To determine qualification for the list, The Washington Post uses a formula which divides the total number of Advanced Placement® (AP®), International Baccalaureate, and Advanced International Certificate of Education tests given at a school by the number of seniors who graduate in May or June of that academic year.

This is the second consecutive year that ISM has been included among America’s most challenging schools. In fact this year, no other private school in Minnesota was included on the list.

“ISM students consistently perform outstandingly on external exams. This is a great testimony to the strength of the SABIS® Educational System, which helps students achieve their full potential and empowers students to take an active role in their education,” stated Ms. Christi Seiple-Cole, ISM School Director.

ISM results speak for themselves:

“Year after year, parent demand for charter schools continues to rise and this year is no exception,” said Nina Rees, National Alliance President and CEO. “As more families see the remarkable results charter schools are delivering, more are looking to enroll their children. Despite continued growth in the number of charter schools nationwide, we are failing to keep up with this high demand. If we want to meet the needs of students and families, policymakers, charter school leaders, and other stakeholders must come together and determine how we can help address this growing list of students waiting to attend a charter school.” 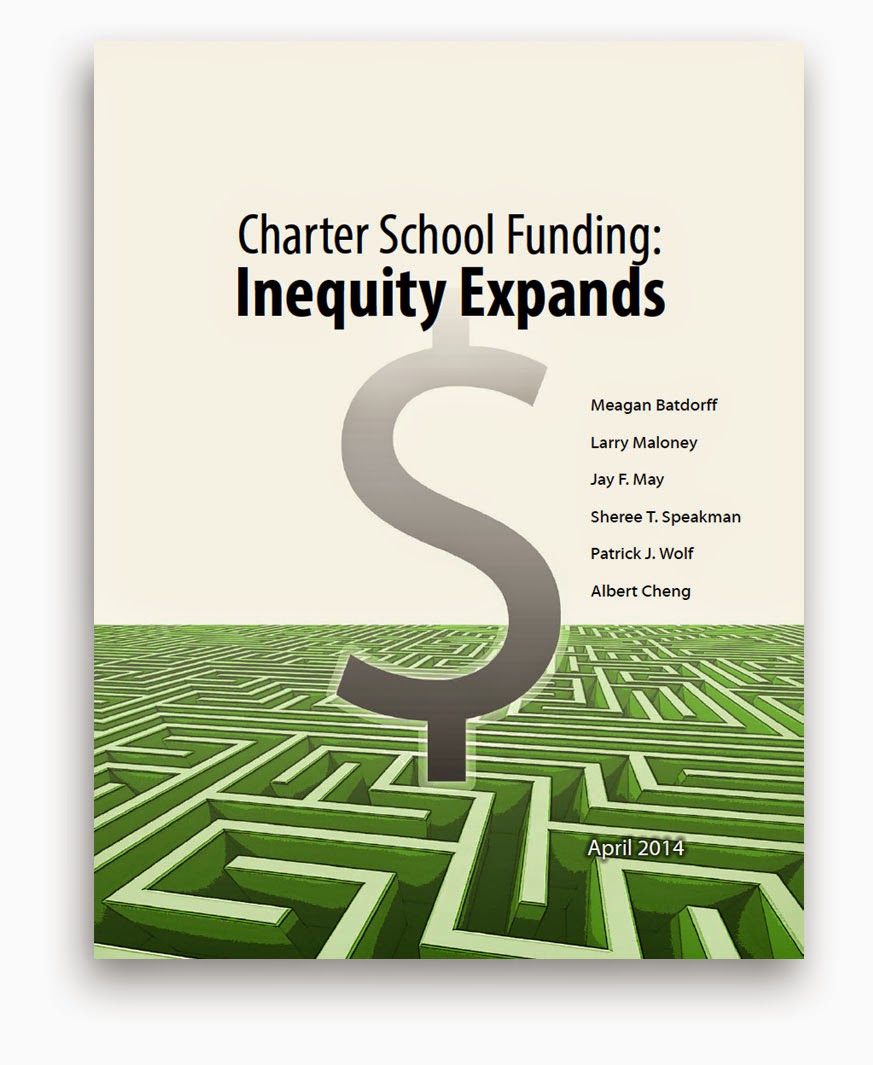 A new report published in April 2014 by the School Choice Demonstration Project by the University of Arkansas's Department of Education Reform reveals continued inequality in funding for charter schools persists across the country.

Here are some excerpts:
The revenue study is based on Fiscal Year 2010‒11 (FY11) data for each of 30 selected states plus the District of Columbia. Traditional school districts and public charter schools were analyzed and aggregated “statewide.”

Magnitude of Disparity: If, in aggregate, districts in the 30 states and D.C. received the same level of per pupil funding as charter schools in FY11, they would have received $110,860,725,324 less in total revenues.

The loss in revenues to a single charter school is enormous. For a charter school enrolling 400 students in FY11, the school received $1,525,600 (weighted) less on average than would have been the case if funding were equalized between district and charter schools.

In FY11 districts received $3,509 more per pupil than charter schools, a 54.5% increase since FY03 (inflation- adjusted). The funding gap has increased significantly since FY03 while charter enrollment has increased in every state and in Washington, D.C., in the same period. District enrollment has decreased in D.C. and in 16 of the 24 states included in this study since FY03 (Methods used for weighted calculations are found in the Appendix).