Charter schools are working, but New York’s mayor wants to stop them

OF THE 658 schools in Chicago, only 126 are charter schools—publicly funded but independently run and largely free of union rules. Fifteen more are due to open this year. More notable, though, is that four of the most recently-approved charters are in areas where the city recently decided to close 49 public schools—the largest round of such closures in America’s history. 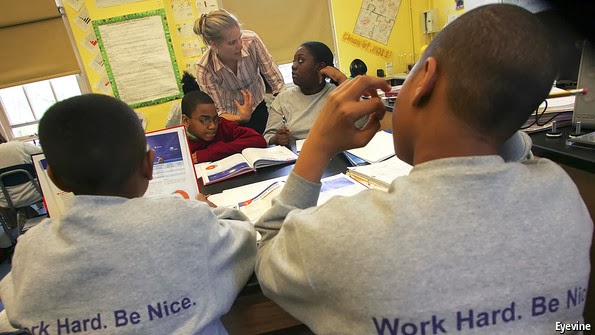 Most of the closed schools served poor black children, and were in parts of the city with a shrinking population. The city government argued that these schools were under-used, and that closing them would save $233m that could be reinvested. So it has been: in new science labs, computers, wireless, libraries, art rooms and air conditioning in the charters that took in children from the closed schools.

Charters have worked well in Chicago. Most parents like them, and Mayor Rahm Emanuel and the Board of Education are behind them. The Noble Network, which already runs 14 charter high schools, has just been given permission to open two new ones. Around 36% of the 9,000, mostly poor, children enrolled with Noble can expect to graduate from college, compared with 11% for this income bracket city-wide.

A 2013 study by Stanford University found that the typical Illinois charter pupil (most of them in Chicago) gained two weeks of additional learning in reading, and a month in maths, over their counterparts in traditional public schools. One city network of charters, Youth Connection, is credited with reducing Chicago’s dropout rate by 7% in a decade. Overall, however, the city’s public schools are in a sorry state: 51,000 out of 240,000 elementary-school pupils did not meet state reading standards in 2013.

Some will always argue that charters cream off the brighter children and leave sink schools, deprived of resources, behind. The teachers’ unions hate charter schools because they are non-unionised. So they remain a rarity nationwide, with only 5% of children enrolled in them. But a PDK/Gallup poll last year found that 70% of Americans support them. Small wonder: a study of charter high schools in Florida found that they boosted pupils’ earning power in later life by more than 10%.

Click here to read full article in The Economist.
0 comments

About 200 charter schools closed due to financial reasons, low enrollment, or poor academic performance. "The goal of the charter school movement is not simply to increase the number of schools and students enrolled, but rather the number of high-quality public school options for families who need them most. These closures reflect that and we will continue to advocate for strong accountability measures to ensure that only high-quality schools are allowed to serve our nation’s students,” Rees said.

National School Choice Week (@schoolchoicewk) is January 26 to February 1 and highlights the different schooling options available.  It includes the popular public and private options, but we are going to learn about lesser known ones such as homeschooling, school choice, and charter schools.  Huda Alawa is representing the homeschool angle, Karen Reuter of SABIS International Charter School in Springfield is representing the charter angle, and Jamie Gass from Pioneer Institute is representing the overall school choice position.

Frederick M. Hess, the director of education policy studies at the American Enterprise Institute, and I coauthored this piece.

Julie Petersen’s piece, “For Education Entrepreneurs, Innovation Yields High Returns” in Education Next (full disclosure: we are both executive editors at the journal that published the article) ignited the familiar hand wringing and invectives about the proper role of for-profits in education in the Twitter-sphere this past week.

The piece does a terrific job profiling three education entrepreneurs who created for-profit companies that all had successful exits in recent years: Larry Berger, who started Wireless Generation, which was sold to News Corporation in a $360 million deal and now underpins News Corporation’s Amplify division; Jonathan Harber, who started SchoolNet, which Pearson acquired in a $230 million deal; and Ron Packard, who started K12, Inc., which went public at the end of 2007 and had revenues of $848 million last year. Peterson also raises some tricky and important questions—and seeks to draw some lessons from the success of these entrepreneurs—about a sector that is desperate for innovation from entrepreneurs and yet one that has been famously resistant to the innovations they have to offer.

Although there have been some signs in recent years that public school educators may be starting to open their minds about working with entrepreneurs who start for-profit companies, the all-too predictable reaction from many on Twitter about the “disgust” of reading about “exit stories” from entrepreneurs in education, provides some clues as to why the sector has been so resistant to working with outside innovators.

But as we wrote in our recent book, Private Enterprise and Public Education, the conversation around for-profits in education all too often misses the boat—on both sides of the conversation.

Critics often accuse school reformers of “privatizing” public education. When for-profits enter the conversation, those same critics level more serious charges and often accuse those companies of having one motive: making money off of the backs of kids.

On the other hand, when education entrepreneurs who have chosen to incorporate as for-profits are asked why for-profit, their answer is typically benign and makes the case that there is very little difference between for-profits and non-profits. As Daphne Koller, CEO of Coursera, a for-profit education company, said in an interview with EdSurge, “The notion of for profit and nonprofit is a red herring.”

But if that’s the case, then why bother with for-profits in public education at all? If they are all the same, then do for-profits bring any unique benefits? If the answer is no, then we could allow only non-profits and government-run organizations to operate with public education funds to ease the skeptics’ worries.

Ultimately we conclude that Koller has a point. In many ways the delineation between for-profit and non-profit is a red herring—that is, when it comes to asking whether an organization is good or bad or of high or low quality. There are plenty of for-profits that do great things in education with public funds, and there are several that don’t; but the same is true with both non-profit and governmental organizations. Stating whether an organization is for-profit or non-profit says little about whether it is doing good things for students.

Indeed, the charge that for-profits are only about making money off the backs of kids doesn’t make much sense. Sure, for-profits certainly want to make money. No surprise there. But to make money, they need to sell products and services. To do that successfully, there have to be willing buyers on the other end of that transaction. If buyers find their products to be of no value, then the companies won’t make money, which gives them an incentive to fulfill the jobs to be done of their customers and build and deliver great products and services.

That said, because laws and regulations govern public education and the government is the ultimate customer for for-profits in public education, policy shapes demand. One of our big conclusions then is that if we have sensible policies and quality control mechanisms that foster smart demand, for-profits can indeed be a force for good.

Non-profits though have these same dynamics in many ways, as they have to create sustainable business models that perform services that their customers—sometimes donors who may not be their users—value.

But that returns us to the original question we posed. If there isn’t much difference between for-profits and non-profits, then why bother taking the risk with folks who are out to make a dime on behalf of shareholders (in the case of for-profits)?

The answer is that because for-profits have owners, they bring some unique strengths compared to non-profit and governmental organizations, including the ability, on average, to attract capital far more easily—not unimportant in a field where people are always clamoring for more dollars. With the ability to raise capital more easily comes an ability to scale faster and to attract top talent with different types of compensation packages. With a focus on the bottom line and a consequent need to provide customers with something for which they are willing to pay, they are often able to move more nimbly in the pursuit of serving the customer, innovating, and boosting productivity. These can be tremendous assets worth explaining and harnessing properly in public education.

By the same token, the volume also explains that these assets are the flip side of real weaknesses. Because for-profits seek to make money and grow, their desire to cut costs and boost productivity can, at times, cause dubious actors to cut corners or market themselves in deceptive ways. If policies incentivize bad things, then for-profits may scale readily by doing work that is not beneficial to society. Similarly, the incentive to grow can cause for-profits to be less rooted in community institutions than non-profits, less stable, and more willing to cut services or personnel.

What this all means is that ultimately the conversation of for-profit vs. non-profit vs. governmental organization is the wrong one. Instead we should be exploring policies that focus on student outcomes and create a climate that rewards good actors and punishes the bad—regardless of tax status. It also means that for-profits need to be a part of the equation so that the public can leverage their unique strengths.

Pieces like Petersen’s that explore the success stories—and draw appropriate lessons from those successes along with raising real questions—can only help us do just that.

See this story at minbcnews.com


FLINT -- How does your child's school stack up?

A Michigan magazine is reporting which schools made the grade by rating them based on test scores and income levels.

When Rachel Portis and her three kids moved from Genesee Township to Flint, sending her children to the International Academy of Flint was a no-brainer.

"This school, couple people I worked with had good ratings about this school so I decided to try it," said Portis.   Her experience, so far, has been a positive one.

"I am so happy," she said.  And so are educators.   "Our director yesterday sent out a great memo to everybody way to go staff! Congratulations," said Art Wezlaff, Director of School and Community Relations at International Academy of Flint.

The school was named an "Academic State Champ" in Michigan's Bridge Magazine.   The International Academy was ranked in the top 10% of 540 Michigan schools.

French says the ranking recognizes "at risk" schools by taking raw scores into account, however, many schools are exceeding expectations.

"To a frustrating degree test scores track with the income of families," said French.  "We should not be doing-based on those factors-as well as we are so that speaks to, I think-the system we use")

Something parents can attest to.  "My son, he has some challenges and this school has really helped him out a lot, a lot," said Portis.

Bridge magazine ranked 540 Michigan school districts and charter schools.  Several other Mid-Michigan schools made the grade including Davison Schools (35).   Others, including Flint and Beecher Public Schools fell to the bottom of the list.
0 comments 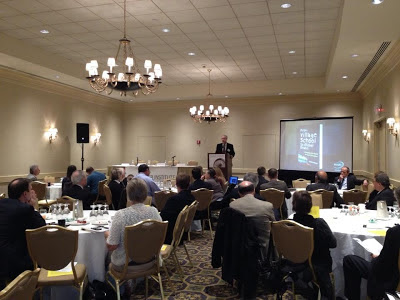 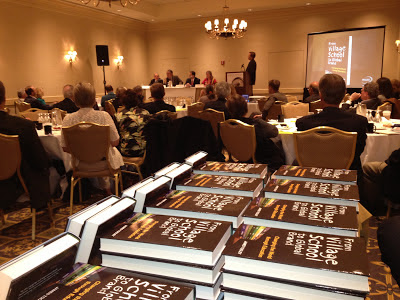 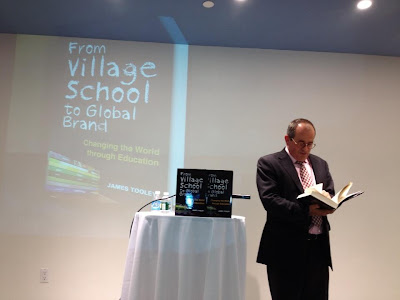 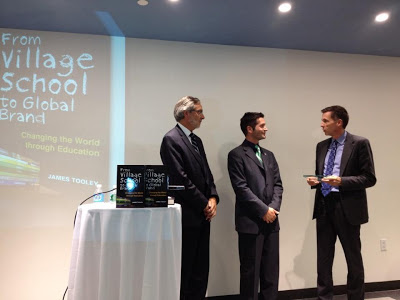 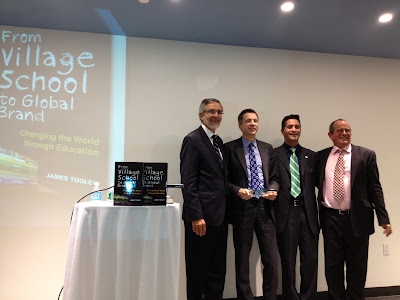