There is no place for discrimination of any kind in public charter schools!

A Louisiana state Senate committee approved legislation last week that would allow charter schools to refuse to admit students on the basis of their ability to speak English, their sexual orientation or other factors.  Regrettably, a New Orleans charter school managed by SABIS, the Milestone SABIS Academy, has been inadvertently drawn into this controversial issue because of testimony by the President of the school governing board.   The bill, SB217, would prevent state agencies and local governments from adding protections against intolerance for all manner of traits and practices that are not explicitly spelled out in state law. Statutes now forbid bias against people based on race, religion, ancestry, age, sex or disability, but not against sexual orientation or language proficiency, which the Department of Education includes in its nondiscrimination clause in contracts with charter schools.

In her testimony, in favor of SB217, Ms. Leslie Ellison apparently stated, according to newspaper accounts, that she is opposed to the Department of Education including a ban on discriminating on the basis of sexual orientation and language proficiency.

Ms. Ellison was speaking as a private citizen and in no way do her comments or views reflect those of SABIS Educational Systems, or the policies of Milestone SABIS Academy of New Orleans.  SABIS is supportive of the Department of Education's more expansive inclusion of sexual orientation and language proficiency in its nondiscrimination rules governing charter schools.  In fact, a review of the SABIS website clearly states the following in its Frequently Asked Questions page:


How are students enrolled in a charter school?

As public schools, charter schools are open to all students and are tuition-free. Charter schools typically serve students who reside in the district in which the school is located. If more eligible students apply than there are places available, the school holds a lottery. Charter schools may not discriminate on the basis of race, color, creed, gender, ethnicity, sexual orientation, age, or ancestry, nor may they discriminate on the basis of a student's mental or physical disability, athletic performance, special needs, proficiency in the English language or a foreign language, or prior academic achievement. A charter school can administer diagnostic testing after students are admitted for the purpose of determining proper grade level placement.

SB217 is a step backward and is not in the best interest of schools.  Below is a public statement released today by SABIS reaffirming its commitment to non-discrimination of any kind. 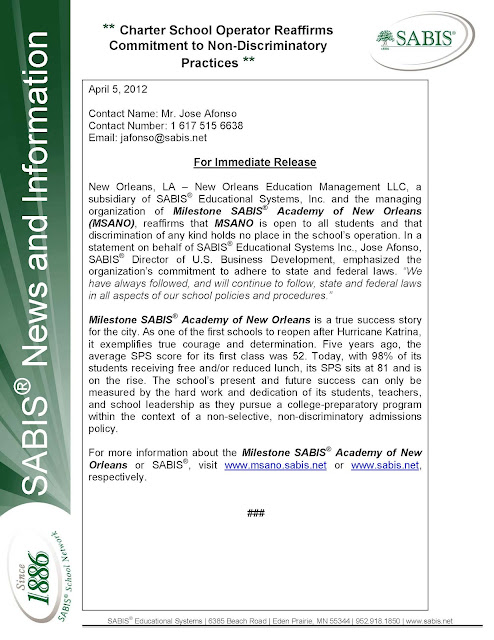