Jazmine Collins is Athlete of the Week for SABIS girls basketball 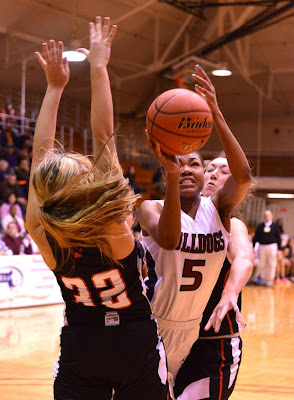 Jazmine Collins, of SABIS International Charter School, helped lead the Bulldogs to an impressive 23-2 record and a Division III Western Massachusetts final appearance in the 2013 season.
An impressive student-athlete, Jazmine averaged 20 points per game in her senior season. Her best game was a 33-point effort in a big win over Brockton High School during the regular season.  SABIS went on a 12-game win streak heading into the sectional title game.

Of note: Collins became the first player in SABIS history to score 500 points in a season. She caps her career at just under 2,000 points.splits the Lee defense for SABIS in the girls Division III Western Mass. championship. - (Republican staff photo by Don Treeger)